How to Open a Bank Account in Costa Rica

Banking in Costa Rica for a Foreigner / Ex Pat

We have been able to personally open an account in Banco Nacional. The process was not hard. It is good to have to the bank and have one help you through the entire process. It is important to get their email so you can communicate back and forth to have everything in order for your next visit.

Most banks in Costa Rica, though, have different policies even today, and still require account holders to be legal residents before they can conduct any financial transactions. So it’s best to check with each bank to ensure whether foreigners, whether they’re residents or not, are allowed to open bank accounts.

Banks in Costa Rica fall into two categories: State-owned or national banks, and private institutions. You can open an account in either category. There are three state-owned banks to choose from: BCR, Banco Nacional de Costa Rica (BNR), and Bancrédito. The largest private commercial banks include BAC San José, Scotiabank, and Citibank.

There are some very important differences that separate the two types of banks. The state-owned ones, for instance, guarantee all deposits and typically have many branches and automatic teller machine (ATM) locations—a prime consideration for residents living in rural or remote areas. However, because they are the more popular option between the two, they are also known for their incredibly long lines.

Private banks, on the other hand, generally have shorter lines and are more likely to employ bilingual staff which, in itself, can be reason enough to go private. They may also offer appealing transactional and cost benefits to Americans with whom they have already established a relationship in the U.S.

Most banks offer accounts in colones, the Costa Rican currency. BCR and BNR also offer accounts in euros and dollars. When we set up our account, we had one in dollars and one in colones. A basic savings account represents the most common type of account and it’s also the easiest to open.

We had heard a source of income was required, but was not asked for at both Banco Nacional or Coopealianza when we personally opened accounts:

It is written on many websites and sources that anyone opening an account at most Costa Rican banks must also provide proof of income. This is to ensure the funds used by account holders come from legitimate sources, and that consumers are complying with federal regulations by not laundering funds, financing terrorism, or trafficking drugs. Salaried employees need proof of income from their local employer, which may include a letter and/or pay stub. Independent contractors need to produce a letter or certification of income from an accountant. Other foreigners may also present proof of their assets from American banks.

There are many websites stating certain items are needed for a foreigner to open a bank account in Costa Rica. Our experience has been the source of income was not needed. The references and documents definitely needed to be in Spanish to be accepted by the bank. Important to have one bank representative handle the entire account opening helps simplify the process and get it done fast 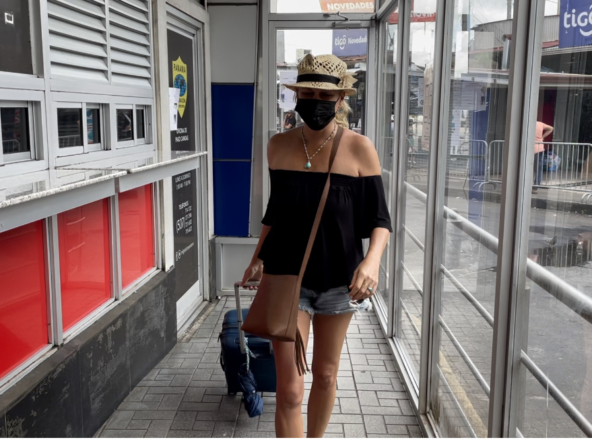 Follow along with us as we cross the border from Costa Rica into Panama. Crossing the border for the first time can be a little intimidating.
Continue reading
by Jim